Tasker Homes – A Turning Point For The Grouted Helical Micropile

Practice makes perfect. Due to a confluence of opportunities, events, and being at the right place at the right time, Danbro and its dealers have had plenty of experience.

At about this same time, the Philadelphia Housing Authority was taking a hard look at public housing. A lot of older highrise construction was crumbling and needed to be refurbished or replaced. Relying on the consensus of urban planners, and social scientists, the PHA, who advocated for fostering community and pride of ownership by creating neighborhoods, embarked on a series of projects that would replace older highrise housing with neighborhood townhouses.

The first two neighborhoods were Raymond Rosen Phase I in 1997, and Raymond Rosen Phase II in February of 1999. Both featured less density, more open space, and compatibility with the surrounding residential landscape. New beginnings and a fresh approach lend themselves to new ideas and technology, and helical piers were used for foundations for both townhouse neighborhoods. Keeping with the theme, helical piles were more neighbor-friendly with no spoils, no vibration, smaller equipment, and less noise.

Tasker Homes, the next focus of the PHA in 2003, is located on the Schuylkill Expressway, one of Philadelphia’s main arteries and the new development would be on display to virtually the entire city. This development would be a highly visible showcase for this new approach.

Everything had to go just right. The old buildings were demolished, creating an upper layer of debris underlain by urban fill. Conventional strip and spread footing would require over-excavation, backfill, and costly soil removal. Timber piles were originally specified, but vibration concerns and multiple mobilizations led the PHA and their construction/engineering advisors to look elsewhere.

Helical piles worked well at Raymond Rosen, but the soil conditions at Tasker Homes were much different, raising concerns about segmented, steel piles. The load test summary on page 6 of the DFI whitepaper on Taker Homes demonstrates why all the concerns about this relatively new technology disappeared. The deeper the pile, the more capacity can be derived from the skin friction on the shaft. Furthermore, the grout alleviated all design concerns regarding lateral, buckling, and corrosion.

Tasker Homes became a showcase for thoughtful, well-planned, public urban development, literally from the ground up. Grouted helical micropiles, uncased, played a significant role in the innovative thinking and execution by the PHA and their construction and engineering partners.

This very public project with 3,645 Grouted Helical Piles helped put this relatively new technology on the map. It then paved the way for another 2,000 GHM at another PHA project, Mill Creek. These high-profile projects, sandwiched between the Environmental Remediation revolution and future Superstorm Sandy work, afforded Danbro’s dealers lots of opportunities to perfect their process.

The Danbro Installer network has installed more grouted helical micropiles, bothcased and uncased, in various soil environments and diverse applications, than any other installer group in the country. And, it all started with Tasker Homes.

The Deep Foundations Institute’s white paper on this ground-breaking project demonstrates how the Grouted Helical Micropile revolutionized the use of helical piles by eliminating design considerations while increasing capacity at a lower cost.

Our cautionary mantra at Danbro continues: “When in Doubt, Grout!” 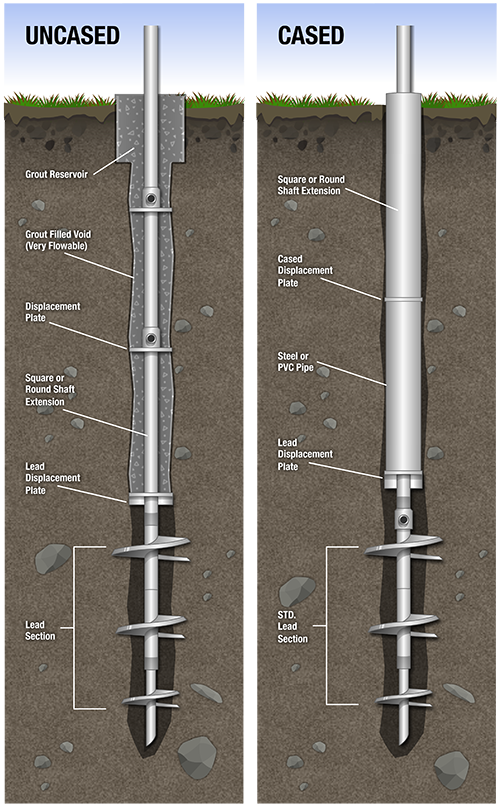